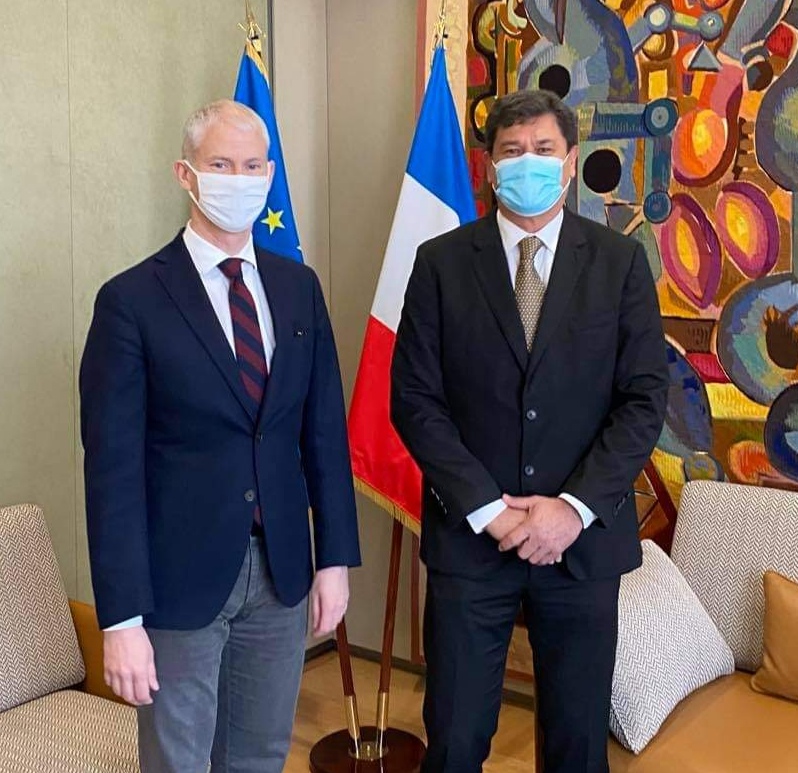 Source : Press release from the Presidency of French Polynesia – April 2, 2021.

The Minister of Finance and the Economy, Yvonnick Raffin, accompanied by MP Maina Sage, met in Paris with Franck Riester, Minister Delegate to the Minister for Europe and Foreign Affairs, responsible for foreign trade and attractiveness, to discuss the existing cooperation between the services of the Country and the State in the matter of promotion of Polynesian products, in particular for export, and of Polynesia, vis-à-vis the investors.

The French Head of economic diplomacy outlined the numerous actions of the State in favour of the promotion of Made in France, in particular international volunteering in companies, measures aimed at outsourcing and internationalising the national economy, e-showcases to promote products, not forgetting the export recovery plan.

Franck Riester also referred to the need for a shift in working methods from working in silos to encouraging synergies at the level of public actors but also at the level of companies.

In response, Yvonnick Raffin recalled the orientations of the government of French Polynesia aiming at creating the best conditions for the development of business in Polynesia, to favour the development of companies, to attract new investors, and to allow all companies to deploy themselves internationally via exports. Although Polynesia is structurally experiencing a deficit in foreign trade in goods, the Fenua has talented women and men, exceptional products and services that should be better promoted to better sell them internationally. All this requires energy, ambition, enthusiasm, but above all method and the association of all the actors concerned.

Wishing to visit French Polynesia soon to relay this message, Minister Franck Riester assured Minister Yvonnick Raffin of his support and the mobilisation of his teams to assist the country in structuring a genuine territorial marketing and export development

Anticipating the future steps of Air Tahiti Nui: visit to the interministerial...